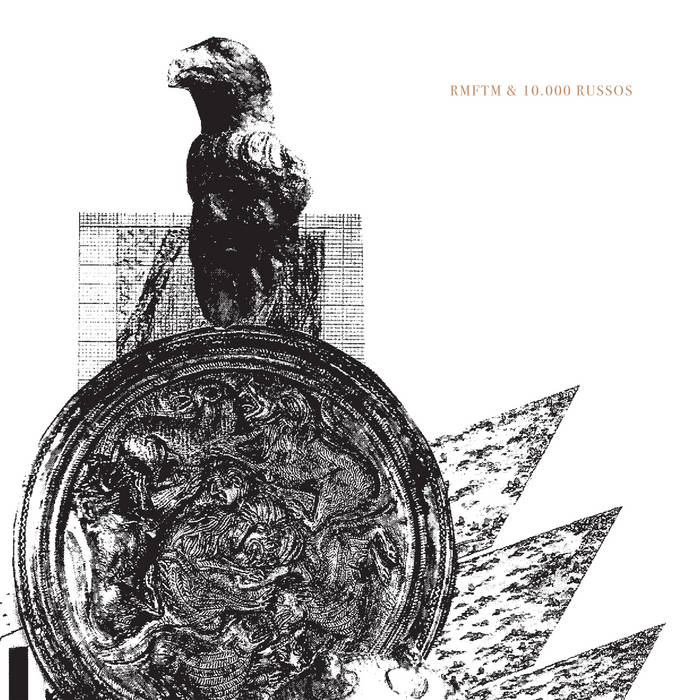 Dutch experimentalists RMFTM (fka Radar Men From The Moon) have already showcased their collaborative mastery when they teamed up with Salford’s Gnod for the Temple ov BBV project last year and having now retired the former output, the Eindhoven four-piece are back with a brand new collab LP with fellow label-mates 10,000 Russos. Portuguese trio 10,000 Russos are best known for conjuring up concrete slabs of kosmische psych-rock and now, having teamed up with RMFTM, their repetitive droning mantras have manifested into a whole new beast – the looped, motorik chants feeding perfectly off RMFTM’s throbbing free-form jams.

Free from any sort of structure or direction, the result is an intense, jarring collection of deranged industrial freak-outs that make Einstürzende Neubauten sound like Depeche Mode. Painting a dreary image of barren, polluted landscapes in the dystopia we seem so desperate to hurtle towards, on this record RMFTM and 10,000 Russos have carved out a terrifying, cerebral soundtrack for the end of times whilst simultaneously asserting, once again, that both bands are some of the finest within the dark, murky underbelly of experimental music. From the pulverising guitars, primal percussion and hissing synths, through to droning Tibetan bowls and buried vocal chants, the album jerks between intense metallic fury and psychedelic hypnosis.

Recorded at Super-Nova Studios with Bob De Wit (Gnod, A Place To Bury Strangers) - whom the bands credit as being the third, equally-important component of the record – the album is just as much of a product of their improvisational approach as it is inspired by avant-garde literature. Whilst Russos vocalist João recites lyrics that are taken from a collection of short stories by Honore De Balzac, one of the forebears of the realism literary movement, they explain the actual writing and production process itself was also indebted to the cut-up techniques of the Beat generation. Talking about the collaboration, Glenn Peeters (RMFTM) explains: “The plan was to create something meaningful in one day. The album started out as improvisations but we didn’t want it to be just a collection of jams, so we went back and pieced all the improv parts together to shape them into something else entirely - using a similar cut-up approach to that of William S. Burroughs.”